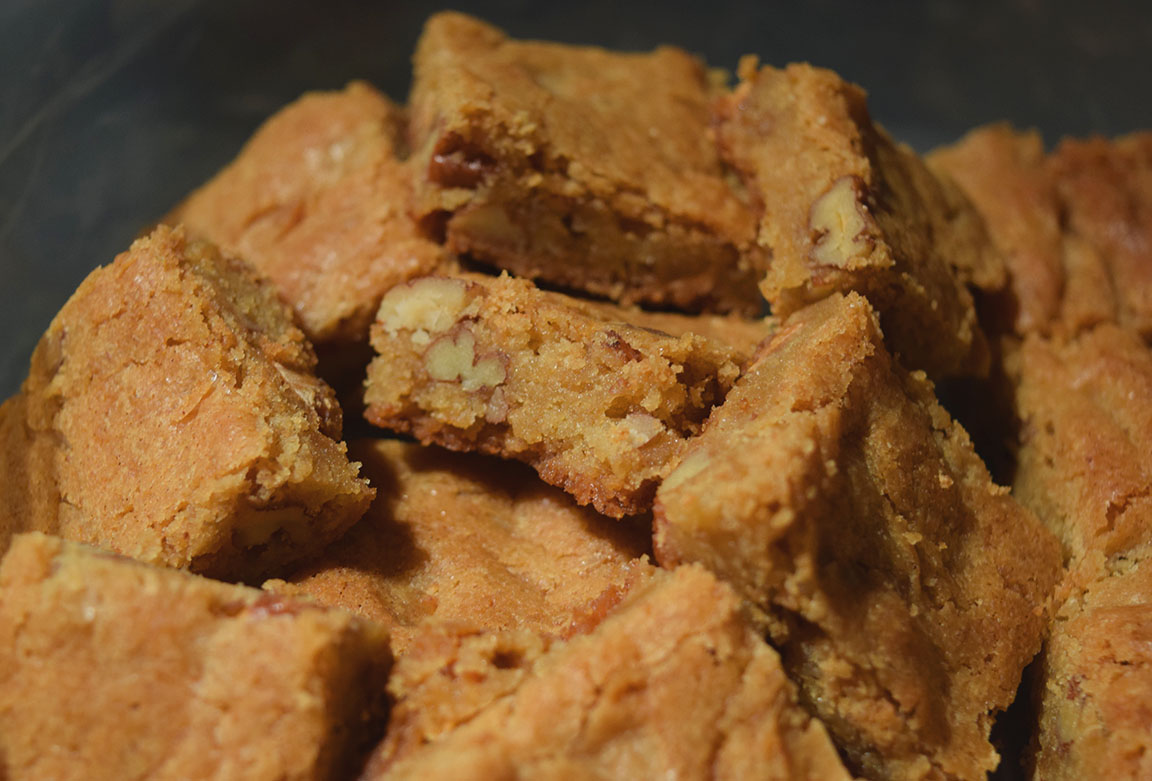 We were amping up for spring break last week, and I had a ton of grading to do, so naturally I baked a cake and made these delicious butterscotch blondies over the weekend. Fortunately, I had an event at work I could bring them to, so I didn't consume half the pan myself.

We were amping up for spring break last week, and I had a ton of grading to do, so naturally I baked a cake and made these delicious butterscotch blondies over the weekend. Fortunately, I had an event at work I could bring them to, so I didn’t consume half the pan myself.

I love a good blondie and this one is pretty great. I also love butterscotch, and this bar is (for me) a textural improvement over the Oatmeal Butterscotch Crumble Bars I made back in December.

For blondies to be good, they need to be chewy and flavorful. I learned from Mindy Segal’s Cookie Love (which I’ve gushed about elsewhere on this blog) that the key is using a lot of vanilla. A lot. She uses two tablespoonfuls in hers, and this recipe calls for a full tablespoon. When I make them again, I’ll up that amount, but one was sufficient to really make these blondies pop.

Also of key importance any time one is cooking with butterscotch chips is to calm down with the butterscotch. It’s a really powerful flavor and can easily overwhelm a dessert. And this is no exception. Since the original recipe is from Nestle themselves that means two things to me: it’s a decent recipe (tested, branded, etc.) and they go overboard on using their product (the butterscotch chips).

It calls for chips in the bars and on top, and if you make it that way, I can’t imagine you’d be able to taste anything but butterscotch – which would be an injustice to the blondie part of the bar and the pecans. I added slightly less than a cup and got rave reviews from all the colleagues that went back for more.

Combine the flour, baking powder and salt in a medium bowl and set aside.

Cream the butter, sugar and vanilla with an electric mixer until well combined. Beat in the eggs just until combined. Gradually incorporate the flour mixture until just combined (you don’t want to over-mix).

Fold in the morsels and nuts by hand, and then spread into an ungreased 13×9-inch baking pan. The batter is quite thick and sticky, so you’ll have to do a bit of spreading – I greased my hands with the butter wrapper and patted the batter into place. You could also use a silicone spatula. Point is, it’ll take a bit of work to get the batter evenly dispersed across the pan.

Bake for 30 to 40 minutes or until wooden pick inserted in center comes out clean. Cool in the pan on a wire rack.