Skip to content
I can definitively say, I never would have made this without prompting... That being said! It's really easy, the ingredients are simple (with a quick run to the nearest Asian market), and it's a nice stovetop recipe that's served cold -- good for warmer months.

And now introducing something totally outside my normal baking wheelhouse! A week or so ago, a friend of mine hosted a dinner party featuring Japanese shoyu ramen as the main course (which was delicious). The evening’s meal would be pan-Asian, with someone else bringing a dish involving kimchi (Korean), so she wasn’t terribly keen on my showing up with a carrot cake or some chocolate pot de creme, no matter how delicious those things might be…

So! I turned to Google, as one does. Thankfully, I had a lot of freedom in tracking down a palate-appropriate dessert, since I had to prepare it in my Airbnb’s kitchen here in Pittsburgh.

I’ve been in Pittsburgh for almost a month, which has been awesome, but my host is a bachelor, and, well, it’s a bachelor’s kitchen… I’ve gotten very creative without access to a mixer! Or a kitchen scale. Or a candy thermometer. Or a mixing bowl…

This recipe fit the bill, in that I could make it on the stovetop without any fancy equipment (!) and all the ingredients sounded pretty good (now that I know what taro root tastes like — courtesy of my friend in Rancho Cucamonga back in December)!

After a fun and confusion filled trip to the Asian market in downtown Pittsburgh, the hostess and I both acquired all the necessary ingredients for our culinary adventure. Turns out, palm sugar comes in a vacuum sealed block or disk (at least at this place), and I had to do a fair bit of wandering around to find it. It’s sort of like brown sugar, in that it’s got moisture/is a bit sticky. I had to resort to cutting it into chunks in order to measure it, and I’m glad it melts into the pudding.

I can definitively say, I never would have made this without prompting. Rice pudding isn’t my thing, and I pretty much always reach for chocolate or caramel when given a choice. That being said! It’s really easy, the ingredients are simple (with a quick run to the nearest Asian market), and it’s a nice stovetop recipe that’s served cold — good for warmer months.

Thus, I’m glad it’s now in my recipe catalogue should I find myself hosting or attending a Thai food or pan-Asian dinner party again in future. It just requires a bit of advance planning both in terms of ingredient acquisition and prep (the rice has to pre-soak, it’s on the stove for about an hour, and it all has to cool).

Grade: B (totally adequate but doesn’t knock my socks off)

For the rice pudding:

For the coconut cream:

Prep the rice the night before: in a medium bowl, add the rice and enough cold water to cover by 1-2 inches. Chill and let soak 8 hours or overnight. Stick the can of coconut milk in the fridge as well, since you want the fat/cream to separate out.

Drain and rinse the rice under cold, running water. Transfer the rice to a 4-quart pot and add 4 ½ cups water. Bring to a boil over medium-high heat, then lower the heat and simmer, stirring occasionally, until the rice is cooked through and most of the water has evaporated. This will take around 45 minutes to an hour.

When there is still some visible water left but the rice is cooked and the grains have started to burst, add the taro and continue to simmer, stirring frequently, until the taro is tender (4-6 minutes). Add in the palm sugar and stir until dissolved. Turn off the heat, transfer the pudding to a medium bowl, cover, and refrigerate until chilled.

In a small pot, whisk the coconut milk, palm sugar, cornstarch, and salt. Cook over low heat, stirring constantly, until the mixture begins to thicken, 8-10 minutes. Remove from the heat and refrigerate until chilled.

To serve, divide the rice among 4 individual bowls and spoon some of the coconut cream on top. 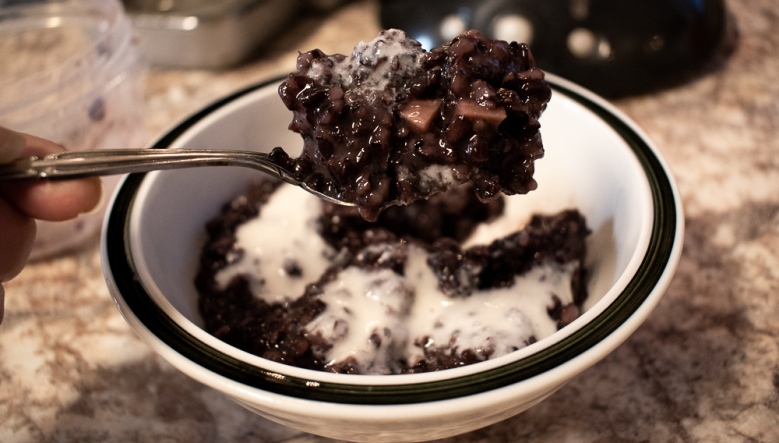