Skip to content
Despite all the training and the planning and the absolute best of intentions, sometimes you wake up race morning, step out the front door, and just KNOW it’s going to be a terrible race. This year’s Flying Pirate Half Marathon in Kitty Hawk, NC was one of those races.

Despite all the training and the planning and the absolute best of intentions, sometimes you wake up race morning, step out the front door, and just KNOW it’s going to be a terrible race. This year’s Flying Pirate Half Marathon in Kitty Hawk, NC was one of those races.

There’s really nothing to be done about the weather. And I can deal with a pretty decent range of it, but it was 69 degrees and 99% humidity before the sun even rose that morning. Consequently, after taking the shuttle to the start and standing around for the better part of an hour, I was already kind of sticky. By mile two, I was dripping with sweat.

Needless to say, this was not a great experience. In fact, I’m not sure I’ve ever been quite so miserable on a race. This wasn’t the hottest race I’ve ever run (I think that honor goes to the San Antonio half in 2013), but it was close. And it was the hottest race I’ve run by myself. In both San Antonio and Orlando, I had friends with me to share the misery. Not this time.

The saving grace of the experience was that the course is pretty dang flat until the last few miles. And! As you might expect with a pirate-themed race, people get really into it. So there were a lot of fun costumes to enjoy at the start. I pray for those brave souls as they ran the next 13 miles in costume.

But this was a miserable 13 miles for me. And the icing on the proverbial cake was that they ran out of pizza. By the time I finished, close to 3:15 (one of my worst times ever), it was 74 and still humid as all get out. In fact, it started raining about a quarter mile before I crossed the finish line. And there was no pizza left for the back of the pack.

But I got through it. And I earned the medal I’ve had on my bucket list for a few years now. So, all in all, it wasn’t as bad as it might’ve been. And I feel especially victorious for persevering.

I’m not sure I’d recommend this race, mostly because you’re playing roulette with the weather. Everything else about it is pretty great: modest size, great swag, really pretty scenery (if you’re able to enjoy it), and reasonably good organization. But the weather, y’all. The humidity. Oh, the humidity!!!

I’m not going to seek out Atlantic coast races in future… I’m not that much of a gambler.

Overall Assessment: Great IF the Weather Cooperates (but it probably won’t)

Elevation Gain: 200 ft (according to Strava) 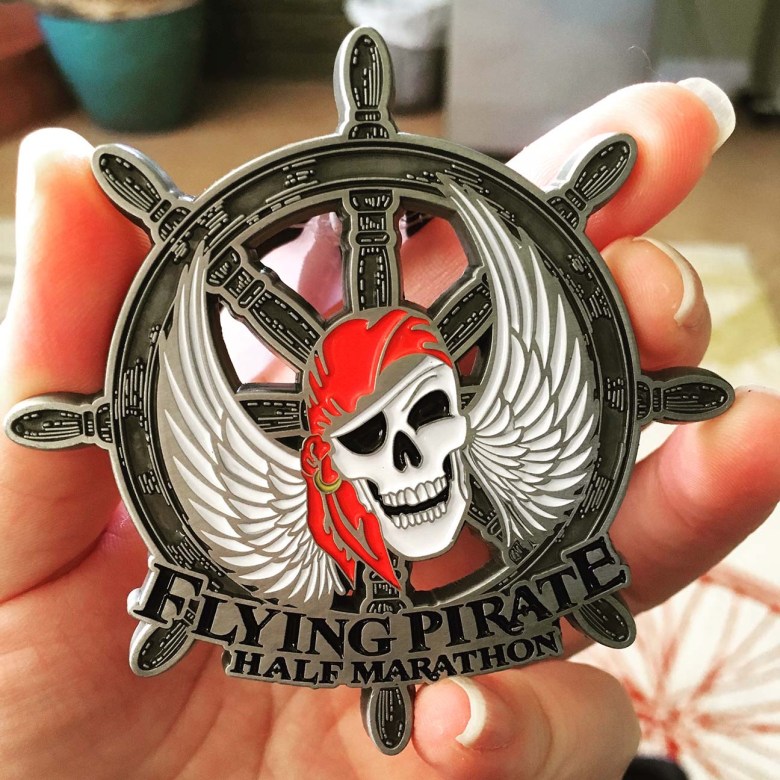