Skip to content
I don’t usually throw around superlatives, but this is hands down the best chocolate cream pie I’ve ever made, and almost the best I’ve ever had.

And since I’ve now made it like five times and had multiple requests for the recipe, it’s high time I shared it with the world (you’re welcome).

I feel like I should note that I’ve never really been that impressed with chocolate cream pie. It wouldn’t have even made my list of favorite chocolate desserts, probably because most of my previous experiences with the confection have been runny or goopy or generally underwhelming. (I’m pretty sure I even made the Cook’s Illustrated recipe a while back and wasn’t impressed). But now! Now, I just might have a signature dessert in my repertoire…

I got on a cream pie kick this summer — looking for things I could make stove-top in the summer heat. Since I hadn’t been impressed with previous attempts at chocolate cream pie, I went hunting for a new recipe. King Arthur Flour yielded the magical instructions for the perfect filling! (It falls short when it comes to crust).

I can’t be bothered with pastry pie crust most of the time. It’s fussy and not usually good enough (when I make it) to warrant the effort. Especially with a chocolate filling, I don’t know why you would go to the trouble. Clearly, a chocolate filling calls for an Oreo crust. (I also made this with a crumb crust made with almond meal when I didn’t want to go to the store — which was good, but Oreo is where it’s at).

The filling in this pie is wonderful. It firms up really well and highlights the chocolate that you use. I’m a fan of Trader Joe’s Dark Chocolate, though you can make this darker (TJ’s 72% dark) or milkier based on your preferences. I’m a dark chocolate kinda gal.

(Note: the original recipe calls for espresso powder, and I’ve tried it both ways. In this case, I actually think it tastes better without) 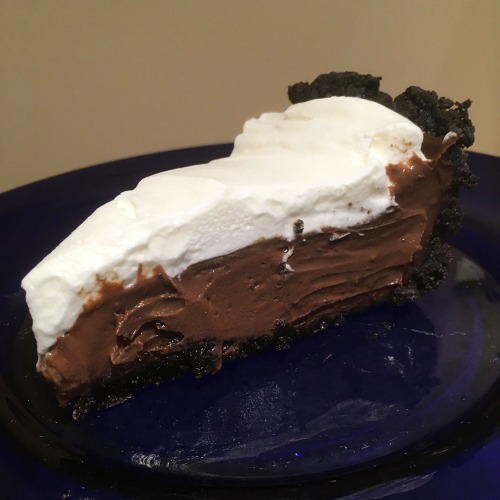 To make the crust: pulse Oreos in a food processor until they become relatively fine crumbs. If you don’t have a food processor, you can also put them in a ziplock bag and bang ’em with a rolling pin. Combine Oreo crumbs and melted butter in a medium bowl, then pour into 9-inch pie plate.

Starting around the edges of the dish, press about half the crumbs up the sides to firmly pack and create a crust. Then press the remaining half into the bottom to seal up the crust. (This is the trick to crumb crusts – start with the sides!) Set the crust aside or put it in the fridge while you make the filling.

For the filling: place the butter, chopped chocolate, and vanilla extract in a medium bowl and set aside.

In a medium saucepan, whisk together the sugar, cornstarch, cocoa, and salt. Whisk in about a 1/4 cup of cold heavy cream until the mixture is smooth, then add another 1/4 cup of the cream and whisk until smooth again. Then whisk in the egg yolks.

Place the pan on the stove and turn to medium heat. Gradually whisk in the remaining 1/2 cup of cream and the milk. Bring the mixture to a boil, whisking constantly/scraping the bottom of the pan. Boil for 1 minute. (If you have a thermometer handy, make sure the mixture reaches at least 165° F, or else it won’t set properly).

Remove the pan from the heat and pour the mixture over the chopped chocolate and butter. Whisk until the chocolate is melted and the mixture is smooth.

Pour the filling through a fine mesh strainer into the prepared crust. This is important, as it’ll catch any lumpy bits from the eggs or cornstarch or cocoa.

Place plastic wrap on the surface of the pie to prevent a skin from forming, and chill thoroughly (3-4 hours).

When you’re ready to serve the pie, make the whipped topping. Place the heavy cream in a chilled mixing bowl. Whip until the whisk or beaters begin to leave tracks in the bowl. Add the sugar and vanilla and whip until the cream holds a medium peak. (You can also do this in advance, but fresh whipped cream goes a bit flat over time).